Hey, this is Patrick Vuong, co-founder of Tiga Tactics.

I want to show you two short videos.

But before I do, it’s critical you understand two points:

First, these video clips are too controversial to share on our social media or in my feature articles for Concealment Magazine and Black Belt Magazine.

That means you’re about to see something we haven't shared before.

And second, a warning: This is real footage of ordinary people in life-and-death situations.

OK, with the warning out of the way, I think they’re vital to see.

There are many similarities between these two videos …

Both victims were minding their own business.

Both men found themselves unexpectedly in a violent situation.

And both were attacked by an assailant they had never met.

But did you catch what they didn’t do?

Neither of them used a low block from Karate.

Neither of them performed a simultaneous block-and-strike from Krav Maga.

And neither of them had the time to do anything other than get stabbed then clutch their left side.

There was no time to step back and draw their own pocketknife or concealed carry pistol.

So, why doesn't the old "I'll just shoot him" or "I'll just pull out my own knife" argument not hold up on the streets?

I’m not just showing you these vicious cases to scare you.

My co-founder, Dr. Conrad Bui, and I have been researching violent crimes separately since the 1990s.

And when we started Tiga Tactics a few years ago, we realized we weren't just watching the same types of videos, we had been studying the same FBI statistics and police reports for decades.

Now, we can tell you based on our combined research and years of pressure-testing that ...

... most knifings are felt, not seen.

So, what you decide to do in that first second could mean the difference between life and death.

Unfortunately, most people make the exact wrong decision … and end up like the men in these videos.

Today, we’ll show you street-proven tactics that help you avoid the critical mistake most people make …

These tactics could save your life.

But, before I show them to you, I need to ask you a few very important questions.

Would you know what to do if someone tried to stab you in the gut with a pocketknife that they had hidden in their hand?

What would you do if someone tried to plunge a 12-inch kitchen knife into your face?

Or would you freeze?

There’s only one right answer.

Maybe you heard about the two elderly Asian women who were stabbed in San Francisco while waiting at a bus stop.

Perhaps you read about the rideshare driver who got shanked several times in Denver by five teenagers after arguing over seat capacity.

Or the Manhattan deli worker who was fatally knifed after a dispute that started over just $0.50. (Yes, 50 cents. How sad.)

It’s not pleasant to picture this kind of tragedy happening to someone in your family.

But, the reality is that, while crimes of almost every category recorded by the FBI has dropped in recent years, violent crime has skyrocketed.

FACT: Murders by edged weapons was nearly FOUR TIMES the amount of homicides committed by all rifles.

So, if you’re thinking this can’t apply to you … that you’re safe … that you live, work, and play in only "nice neighborhoods" … and violent crimes only happen to other people …

I urge you to think again.

Violence doesn’t care who you are, where you live, or what you do for a living. Why?

Because safety is an illusion.

“Safety” is a thinly veiled artifice that’s only barely maintained when everyone agrees to an unsigned social contract.

You don’t have to be a victim.

You CAN protect your family from thieves, murderers, rapists, child molesters, and other criminals who won’t hesitate to use a blade.

This guaranteed home study course is comprised of 24 videos (yes, twenty-four videos!) that will give you a practical and comprehensive approach to not only spotting and avoiding an edged weapon attack, but also help you beat back a knife-wielding psycho.

Don’t be fooled into thinking this is like any other course out there.

"Stab Proof" contains no martial arts myths or knife-fight fallacies like many other programs.

In this simple, comprehensive, and reality-based "Stab Proof" course, you'll get: 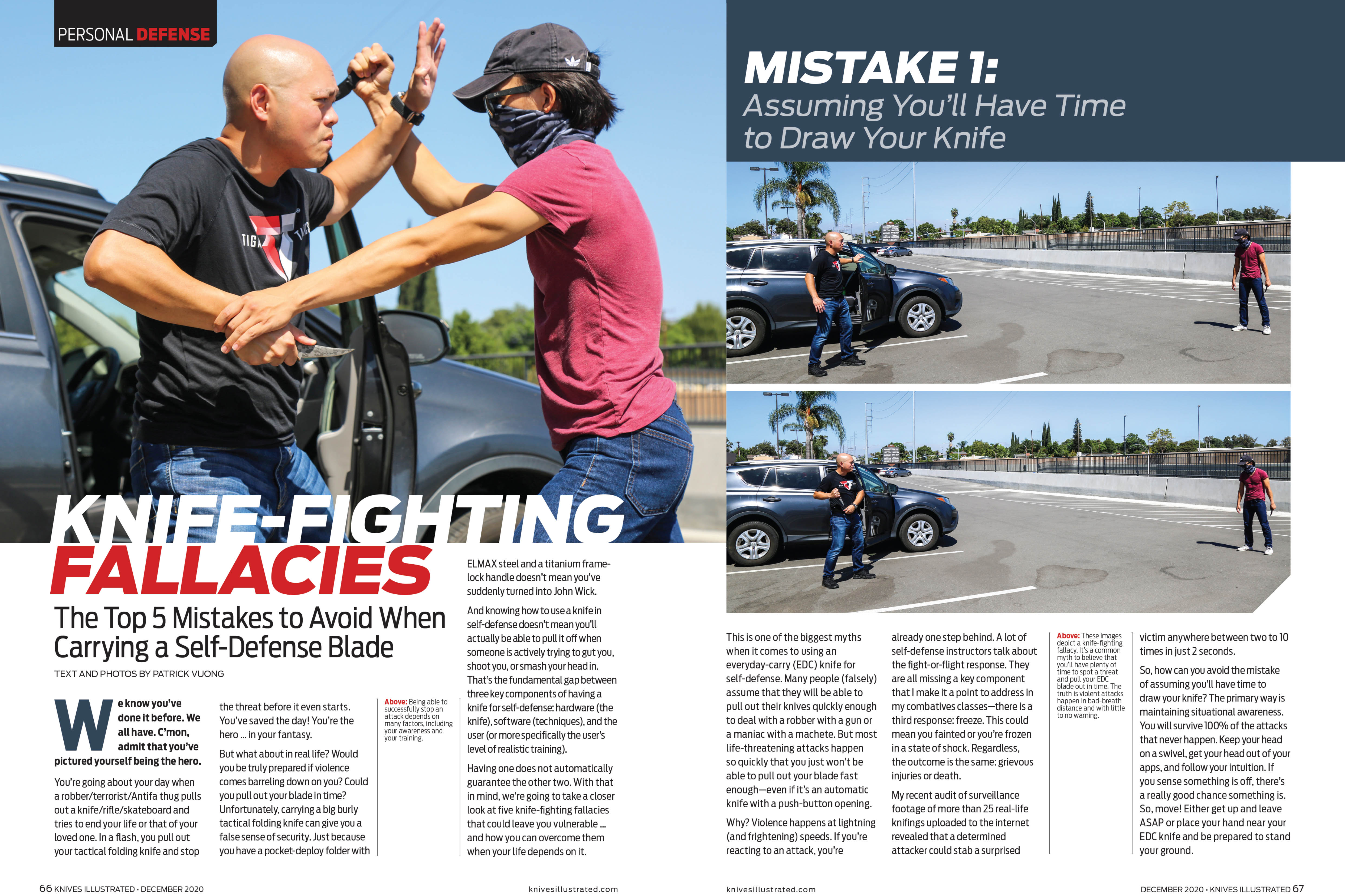 Patrick Vuong in a recent issue of Knives Illustrated, where he explained the dangers of training for common knife-fighting fallacies.

Well, I'm an instructor in the bladed art of Pekiti-Tersia Kali, which uses a wide range of edged tools, including knives and machetes.

I'm also a black belt in Kenpo Karate and Southern Shaolin Kung, and am a certified handgun instructor.

If that weren’t enough, I also served as the senior editor of Recoil Magazine, where I had the honor of studying under some of the country’s elite warriors, including current and former members of the U.S. Army Special Forces and the U.S. Navy SEALs.

And as a subject-matter authority, I'm often asked by international publications like Knives Illustrated (above) and Black Belt Magazine to write about real-world combatives and self-defense. 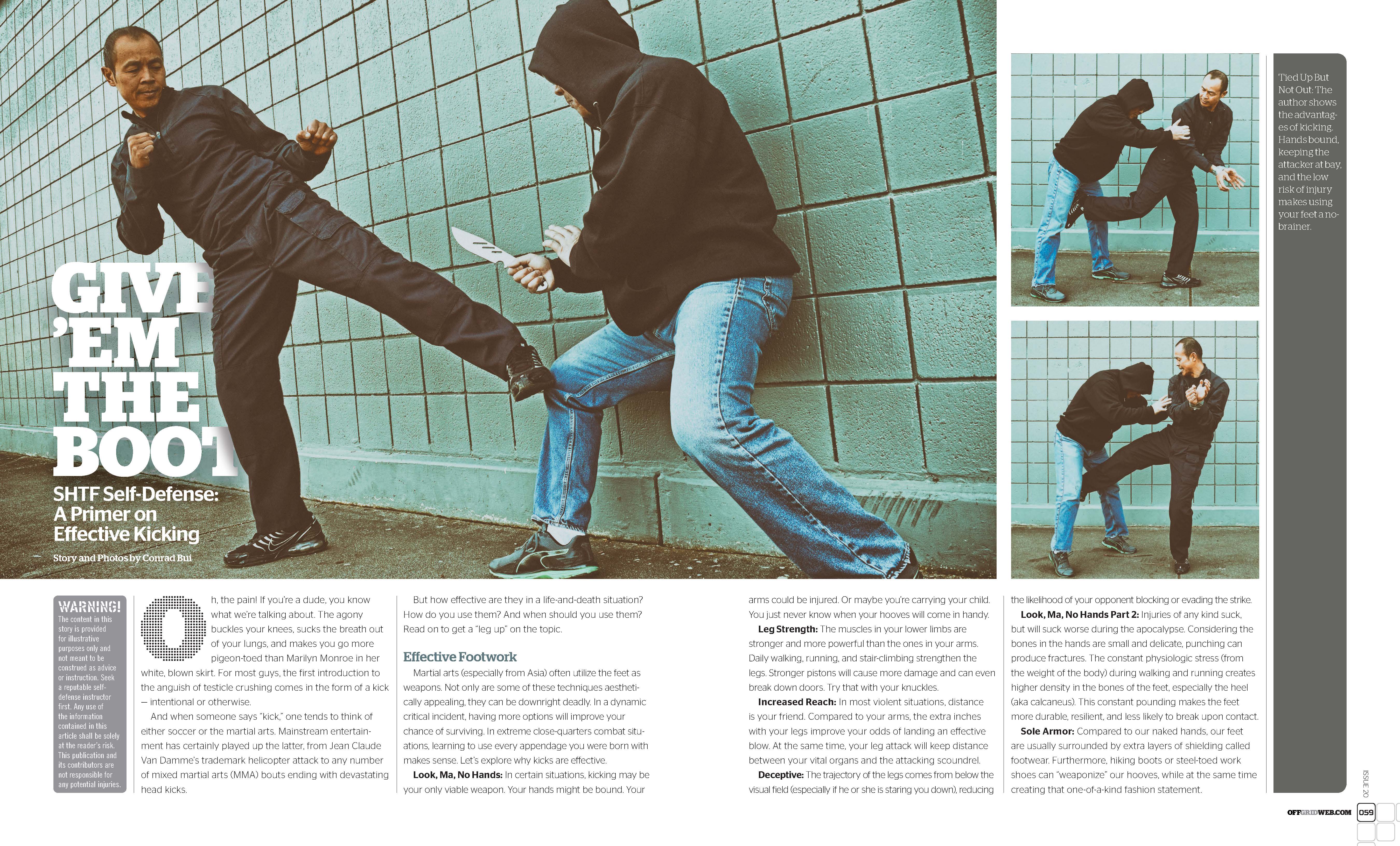 If that's not enough, my co-founder Dr. Conrad Bui has been involved in Kali (a deadly bladed art from the Philippines) since 1990, eventually earning the rank of guro (instructor).

Later on, he achieved certification as a senior instructor in both Silat Serak and Kuntao Silat de Thouars under legendary teachers from Southeast Asia who specialize in edged weapons.

Along with his advanced rankings in bladed combat arts, he is also a Muay Thai coach at World Team USA and a competitive black belt in Brazilian Jiu-Jitsu.

To round out his skillset, he has also spent time ducking haymakers and beer bottles when he pulled security duty as a bouncer at a biker bar.

Together we have trained hundreds of students in the use of both empty hands and weapons like knives.

With the murder rate and violent crime skyrocketing in the past year, you just don't have that kinda time to learn how to safely and effectively defend against an vicious knife attack.

You need something that'll work quickly and NOW.

So, to make sure you have everything you need to protect yourself and your loved ones, we're offering "Stab Proof 1.0" — one of the flagship courses in Tiga Tactics Combatives.

And for a limited time, we're also throwing in $663 IN BONUSES for you! 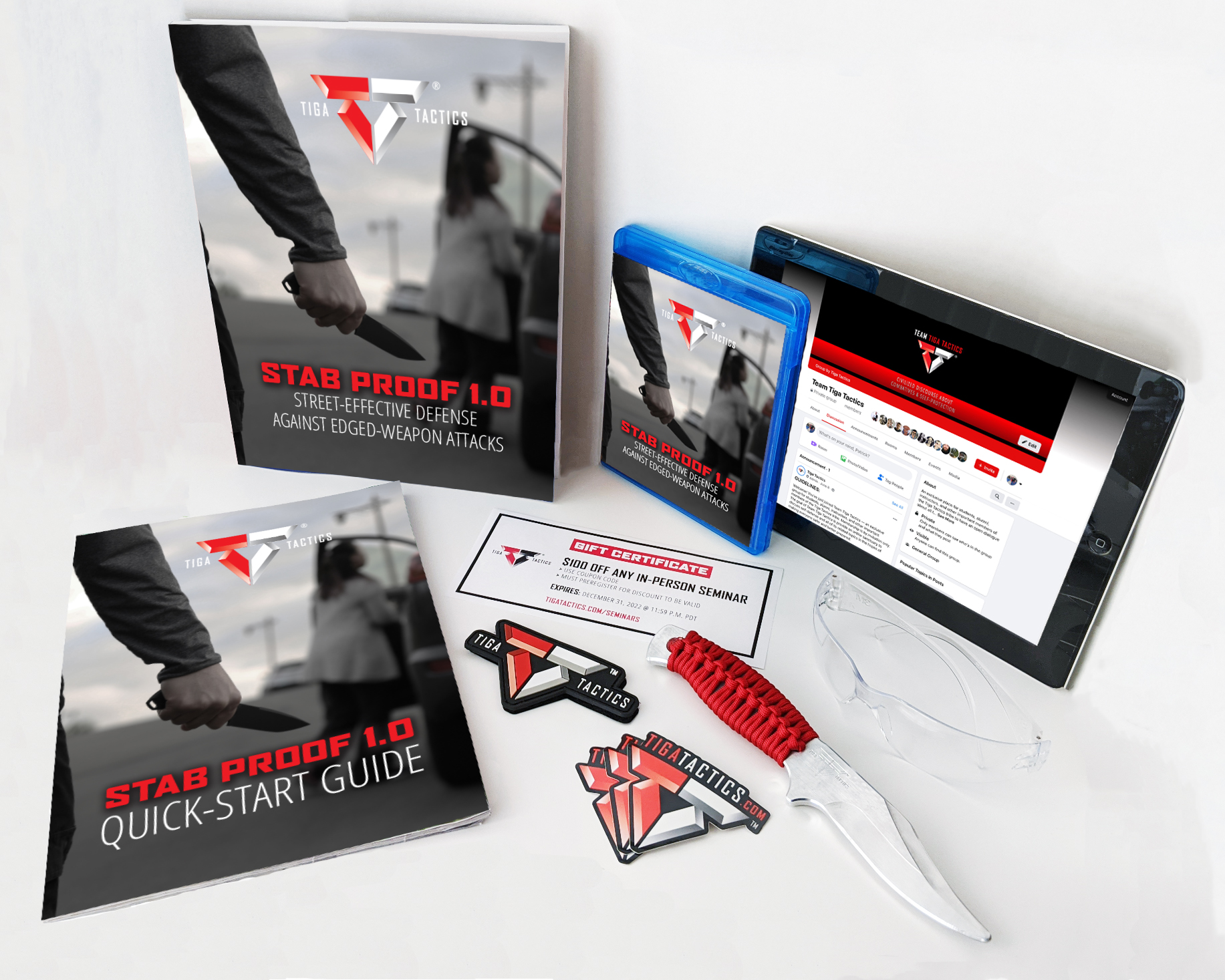 I’m sure we can both agree that your life and the life of your loved ones is worth much more than this investment of $600.

But, in case you still have any doubts, just read what one of our students — Lance Smith of Reno, Nevada — had to say about this program …

“I have had some training from different martial arts over the years — Kung Fu, Wrestling, and Taekwondo. These have all been great disciplines, but I never felt like I could use a lot of those techniques for real life, especially if I am being attacked by someone with a knife.

"Conrad and Patrick from Tiga Tactics really break down the essentials of how to survive these deadly situations. Heaven forbid, I find myself in a knife attack, I feel so much more confident knowing the tactics of how to protect and defend against such threats.

"To anyone who is looking for a straightforward way to survive a knife attack, without the Pish Posh and Hollywood fantasy. Tiga Tactics is the best of the best.”

The bottom line is, you owe it to yourself and your family to have the knowledge, skills, and training you'll get from our home study course.

Additionally, we have something else for you if you qualify ...

… we’re also giving another 15% discount to those who put themselves in harm’s way for the greater good!

So, if you're in the USA or Canada and you’re:

If you qualify, and you want in on the discount, email me at patrick[at]tigatactics.com (make sure to replace "at" with the @ symbol) before you order, and we’ll take care of you.

It’s the least we can do for your service!

And, of course, everything today is backed by our …

We want you to be 100% satisfied with this course.

So, buy the course.

Study the techniques at home.

Practice all of the drills by yourself and/or with a friend.

If, at that point, "Stab Proof" doesn’t make you feel safer …

Then write to me, tell me why you're not satisfied, and I’ll refund every cent you’ve paid me today.

That's how confident we are that you'll value this life-saving course.

So, there’s no risk to you at all. You’re either 100% satisfied. Or you’ll get your money back.

Just keep in mind, this special offer won't be around long.

As soon as you sign up for this training, you'll get instant online access to "Stab Proof 1.0" and a confirmation email with links to your digital bonsuses. Your physical bonuses will be shipped out once I get your address.

What it all boils down to is this: You can either miss out on this training that could save your life …

Or you can take advantage of this risk-free offer and get "Stab Proof 1.0" delivered to you immediately.

Go ahead and click on the red button below right now.

P.S. — Just to summarize, we’ve got an online course that can train you and your loved ones in simple, reality-based knife defense.

On top of that, if you order oday, you’ll get $663 dollars in bonuses to help you train up faster!

Oh, and all of this is backed by our money-back guarantee.

P.P.S. — If you wanna know how well our training’s worked for other people, check out what our students are saying about "Stab Proof" below.

"When it comes to techniques, things go from complex down to simple. In my mind, simplicity is perfection. You guys distilled it down to two very solid techniques that integrated very well with a variety of different backgrounds and skillsets. You guys exceeded my expectations on every level."

"I’ve seen a million videos over the years of knife attacks. This is one of the first classes that deals with the multiple strike aspect. It’s very simple and super effective."

"What I liked was that you broke it down to really simple things so I can walk out of here remembering it. And I like that you did the research — that’s much more useful than anything like this that I’ve been to before."

"I have had some training from different martial arts over the years — Kung Fu, wrestling, and Tae Kwon Do. These have all been great disciplines, but I never felt like I could use a lot of those techniques in real life — especially if I am being attacked by someone with a knife. ... I feel so much more confident knowing the tactics of how to protect and defend against such threats. To anyone who is looking for a straightforward way to survive a knife attack — without the Pish Posh and Hollywood fantasy — Tiga Tactics is the best of the best!

"Conrad and Patrick give you the honest realities of a knife attack, and how to keep yourself as safe as possible. I learned preventative and active techniques to defend myself against knife attacks in almost any situation. Through practicing the various drills, and awareness applications, I am confident that I am better prepared to navigate the unpredictable world. I recommend Stab Proof to anyone because the concepts are practical, reality based, and the instructors teach them in a way that is both entertaining, and easy to understand."
ORDER NOW
ORDER NOW