When it comes to giving credit where credit’s due, our co-founder, Dr. Conrad Bui, can honestly say that we wouldn’t be Tiga Tactics without our teachers.

And this month there’s one teacher in particular we want to honor ...

… but the one thing that stands out is just how wise he actually is!

In fact, Conrad distinctly remembered his early training with Uncle Bill (as he prefers to be called) and finding it so mind-blowingly effective that …

Conrad felt like he had wasted years studying Tae Kwon Do when he could have been learning Kuntao Silat de Thouars!

When Uncle Bill heard this, he didn’t say the usual, “Oh-ho, yes. Our martial art is a lot better than some namby-pamby foot tag.”

Uncle Bill’s a better man than that.

Instead, he took Conrad aside, gently looked him in the eye, and calmly told him, “No, you did not. Don’t call something a waste just because you don’t understand it yet.”

This one lesson hit Conrad way harder than any punch Uncle Bill could’ve thrown at him, and ever since then, Conrad’s kept his eyes and ears wide-open whenever he was training.

This type of mindset allowed Conrad to view all forms of self-defense with a new level of open-mindedness and curiosity.

That’s why, ever since then, Conrad’s made it a point to return the favor to Uncle Bill by helping him as much as he can, whenever he can.

And that's why we decided to present ...

It's a daylong seminar taught by Uncle Bill and his top instructors, with all proceeds going directly to Uncle Bill himself.

Here’s what’s in it for you. 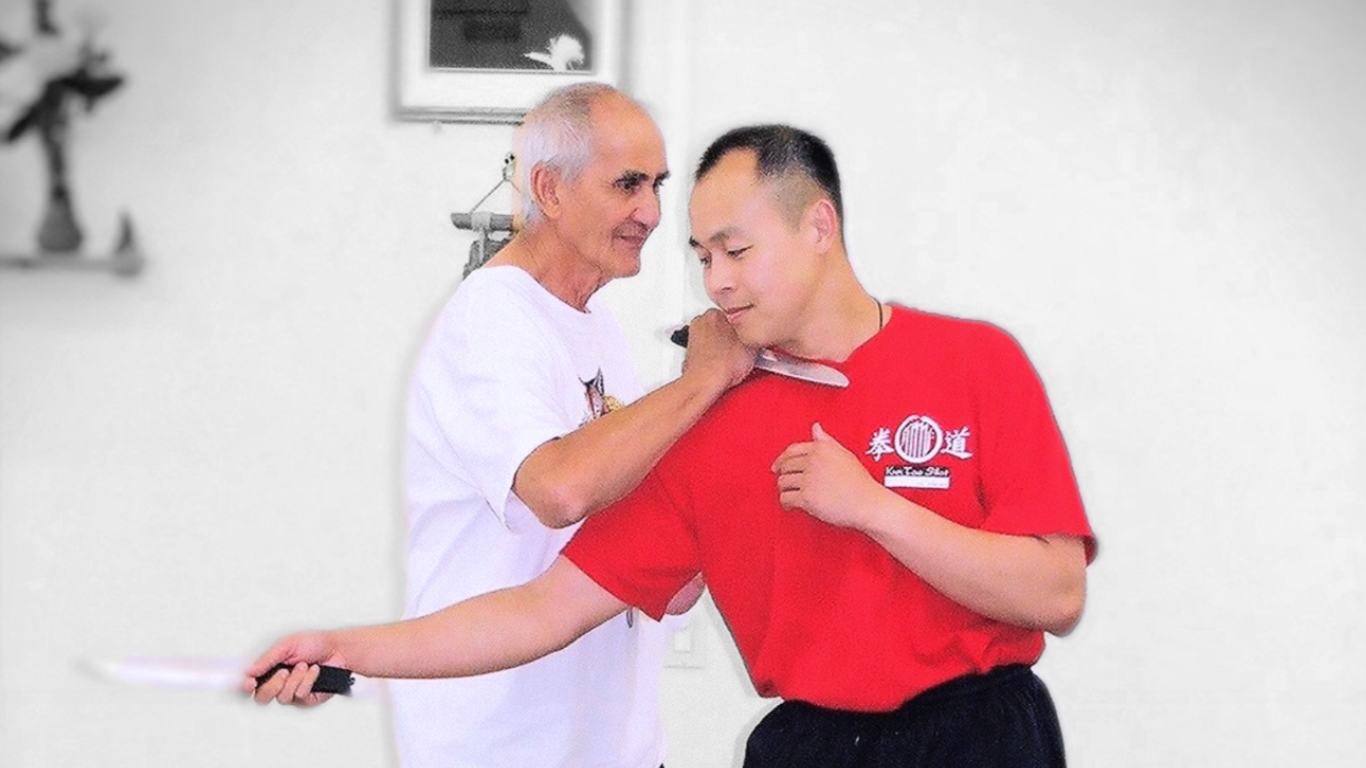 How you train is more important than what …

… but if Conrad had to choose any one martial art for self-defense, it would be Kuntao Silat.

See, back before Conrad went on a total martial arts binge and started racking up black belts in numerous systems, he had no idea what he’d be in for when he got into Indonesian martial arts.

When Conrad stepped into Uncle Bill’s doors, Uncle Bill surprised him with one interesting lesson.

And it was that lesson that made him regret learning Taekwondo for a moment, because what Uncle Bill taught him was to completely cover his head with his arms!

Now, this wasn’t your typical Muay Thai guard or your boxing guard.

In fact, if you’d seen this in person, you would’ve sworn that what Conrad just learned was how to flinch!

And that’s because Kuntao Silat’s knack for fighting in close quarters — with and without weapons — forces you to get really good at weaponizing your flinch response.

So, when it comes to learning something that you’ll use for self-defense against some rampaging thug …

… you can’t go wrong with a system that encourages you to USE your flinch response in a way that actually protects you, even if you’re half the size of your attacker!

On top of that, if you train in Kuntao Silat’s bladework, it’s a very easy carry-over into your EDC knife.

Wanna know how we started off when it came to using a knife? Probably about the same … or worse … than you!

We’d treat the knife like it was a lightsaber … the slightest touch meant that we got cut.

So, we also moved like the knife was holding us hostage!

The thing with a lot of the martial arts we learned, though …

... is that they come from Southeast Asia — whether that’s the Philippines, Thailand ...

… or Indonesia, the birthplace of Silat.

So, when Conrad went into Silat, he ended up getting a heck of a crash course on hand-to-hand weapons …

Now, we’re not saying you’ll move like Uncle Bill in one webinar.

But you will learn knife moves that you can use in case you have to bring your EDC blade out to play!

And it’s not just the good ole sewing machine, either …

… these are knife moves that you can use to put someone down without killing them, so you can keep yourself alive without having to send someone to the morgue.

… and all proceeds go toward helping Uncle Bill, as our way of thanking him for shaping what Tiga Tactics is today.

Sign up, and we'll send you an email with the link on the day of ...

Once you've paid, you'll also get free unlimited access to the recording in case you can't make the live webinar!

That means, for $35, you get to learn from some of the top names in Indonesian martial arts in the United States ...

... learn the kind of fighting skills that'll help you put down a thug ...

... and learn from the comfort of your own home.

So, if Kuntao Silat sounds like your ideal martial art, and if you want in on it, here’s what you’ll wanna do next.

Yes, I Want to Enroll for Access
We suggest moving this party over to a full size window.
You'll enjoy it way more.
Close
Go Fullscreen